In my career, I’ve worked with organizations that handled uncomfortable, contentious, and controversial, topics in different ways. I’ve experienced both ends of the spectrum, from pretending butterflies don’t procreate* in order not to offend a large conservative community to strongly championing the theory of evolution and, subsequently, offending another large conservative community.

In every instance, the museum chose to either ignore or engage with controversy. But recently, I’ve been watching a museum take another approach: creating space for controversy.

Earlier this year, the Freiburg Museum Natur und Mensch held their annual Vom Ei zum Küken exhibit. The highlight of the exhibit are the baby chicks hatching each day, but this time the museum expanded the exhibit to look at biological development across the animal kingdom. When I went into the gallery to begin an audience evaluation study, I noticed that, alongside a taxidermied duck-billed platypus, there was a table covered with animal rights pamphlets. 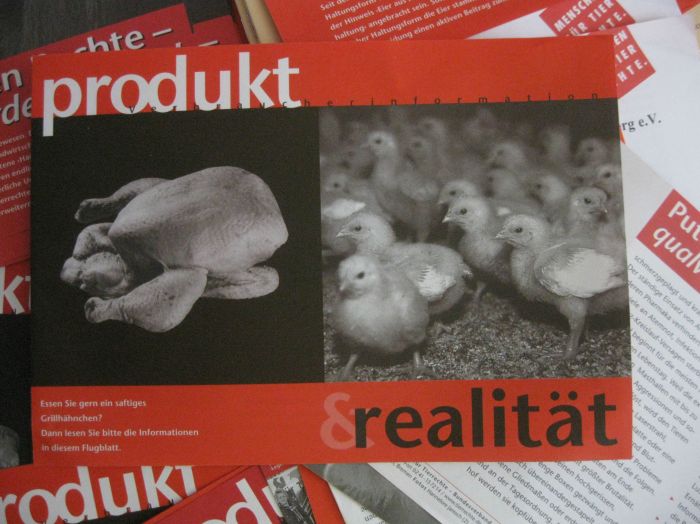 “Do you enjoy eating a juicy grilled chicken? Then please read the information in this leaflet.”

At first, I thought someone had sneaked the materials into the exhibit. After all, I once worked at a museum that regularly had a man running “Biblically Correct” tours show up and hijack our dinosaur exhibits. But every time I went back to continue my study, the materials were still there. And people were reading them.

When I spoke to a colleague about the pamphlets, I found out that the museum occasionally allows groups and causes to display information when it has a connection to an exhibit or program. But unlike other museums I’ve seen, who partner with a group to specifically discuss an issue within an exhibit, here the Museum Natur und Mensch was just letting the issue exist. They had made space for the controversial topic to be part of a visitor’s experience, even though the museum wasn’t facilitating or participating in the conversation.

Lately, as I talk with more and more colleagues and friends about how their museums are choosing to address controversial subject matter, I keep thinking about the approach of just creating space. What does it do, and how do visitors interpret it?

In all the conversations about tackling difficult contemporary issues in museums, the assumption is almost always there that the museum will, if not take a side, at least actively be the moderator. That the museum will curate the space for visitors to explore the story. But what if they just create the space instead? Leave a hole for someone else with a message to fill?

What do you think? Do museums always need to take a specific stance on a controversial subject? Is giving space the same as giving an endorsement? Can museums ever truly be objective when presenting information on sensitive topics?

*”What are those butterflies doing?” “Umm, playing…”