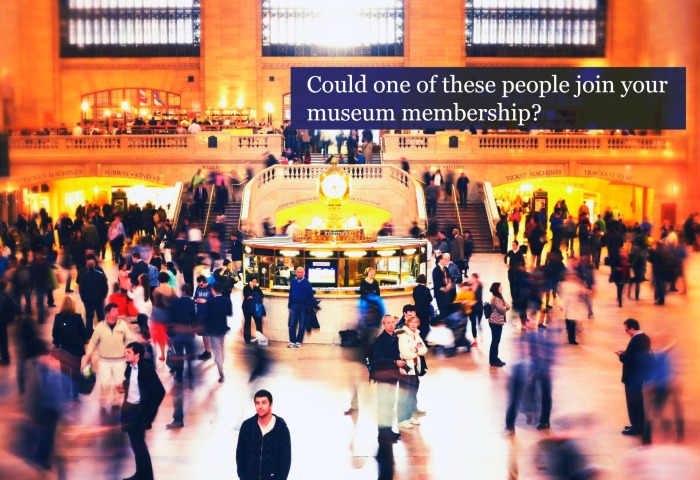 Every once in a while, I find myself in a round of “Fantasy Museum. “The rules are simple: What would I try if money and practicality were no object? A lot of my ideas are predictably extreme, but more than once those impossible ideas have filtered down into something plausible and even reasonable.

The other day I was sitting in the sunshine with a coworker, watching people outside the theater queue into lines for members and non-members. Between bites of my lemon gelato, I mused, “What if museum members had the option of adding strangers to their memberships?”

My coworker laughed, saying she was now imagining people with memberships running out onto the street and grabbing strangers to drag into museums. She then reminded me that it would never fly in Germany, because Germans “just don’t do strangers.”  But I kept thinking about the idea, and I kept thinking, “Maybe?”

Many museums that charge admission are already moving away from traditional membership models. “Families” are flexible, with grandparents, caregivers, and partners added to the list. Some museums offer blanket group memberships, so that friends or coworkers can engage together. We’re already letting visitors define their membership groups; what would happen if part of that definition included someone they don’t know?

What could a membership system based on the absence of relationship instead of the presence, do for visitors? For the museum? What could happen if strangers were connected to one another with the museum as the anchor point? Could this support community? Grow community? Or reinforce divisions already existing within a community?

My first thought was to amend existing membership structures – a “stranger add-on,” if you will. Purchasing a membership could automatically extend membership to someone else who didn’t have one. Museums could target communities that could benefit from increased museum access and use traditional membership to supplement accessibility. Community organizations could apply for available stranger passes, or members could select an organization they wanted to extend their membership to. Or perhaps a standard membership could come with a set number of “Stranger Passes.” A member coming to the museum could elect to activate one of their passes and the next non-member through the door would get free admission that day.

An idea like this generates questions. Would the traditional members and strangers know each others’ identities? Would they ever meet? Could the museum facilitate events that connect these people who might not otherwise ever know one another, or would the connections be more secretive? I can almost imagine “members” and “strangers” crafting messages to one another, sharing favorite exhibits and museum moments, with the museum acting as the go-between.

It’s an interesting idea, but also a potentially problematic one. As much as I could see a process like this creating moments of opportunity, I can also see it creating a sense of unwanted obligation. How could an organization structure a membership program like this without creating a hierarchy of “haves” and “have-nots,” where members become benefactors and their “strangers” become charity cases? And what if the mere concept of a classifying someone as a “stranger” reinforces the idea that what they’re a stranger to is the museum itself and that they don’t belong?

The museum could host specific events aimed at the stranger memberships, inviting people who share a membership to get together and share new experiences. I suspect a system like this wouldn’t do much to expand the demographics of whose coming through the door, and chances are that stranger groups would end up being composed of largely like-minded individuals (because if you’re going to buy into a stranger-based membership at a museum, face it – you’re probably already a certain kind of person), but it would still be an interesting experiment in connection-making and relationship-building.

No One’s a Stranger?

In the end, however, if museums are interested in building community and connections, perhaps “stranger” isn’t a word that should be part of the process. What would you call it instead?