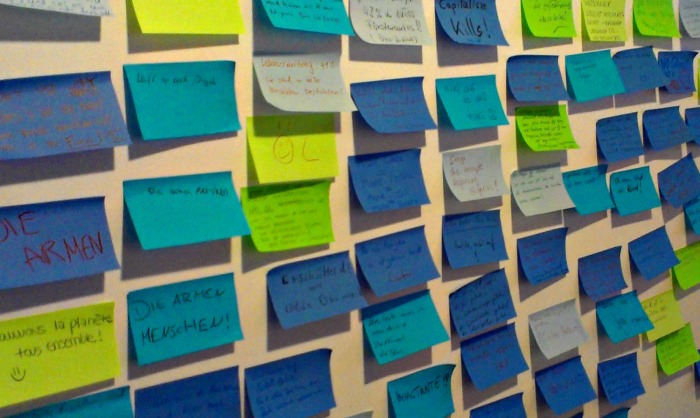 While working on a new evaluation project with the Freiburg Museum Natur und Mensch, I’ve come across an interesting example of  how un-prompted visitor-contributed content can work.

In the temporary exhibit “Letzte Ölung Nigerdelta,” one room invites visitors to sit and watch a projected series of photographs exploring the social, economical, and environmental affects of the oil industry in Nigeria. It’s a powerful space. Even without captions or narrations, the images are moving and emotional.

The screening room, seen through a dividing curtain. The edge of the Post-it note wall is to the left.

Other than chairs and the images, the only other thing in the space is a small Post-it note wall for visitor thoughts. But unlike most other similar visitor-contributed content opportunities I’ve seen or worked with, this one has no visitor prompts.

There’s no questions to answer, no ideas to consider, no comments to respond to. The talkback station is  just a wall, a stack of Post-it notes, and pencils. Visitors are free to use it however they see fit.

I’ve monitored the wall every week since the exhibit opened, and here’s what I’ve observed:

The exhibit will be open for several more months, and I’m curious to see if the activity I’ve observed continues, or if there’s a change in visitor contributions the longer the exhibit is open. But here, for now, are some preliminary thoughts.

Why the interactive works without prompts:

All that said, I do wonder how the experience might change if prompts were included. Would more visitors contribute, or fewer? Could we create scenarios where visitors comment on each other’s thoughts, building larger discussions and debates, instead of mainly reacting to the images?

Ultimately, for this space and content, what best serves the visitors: a place for a dialogue, a place for an outlet, or a place for some other combination of the two?